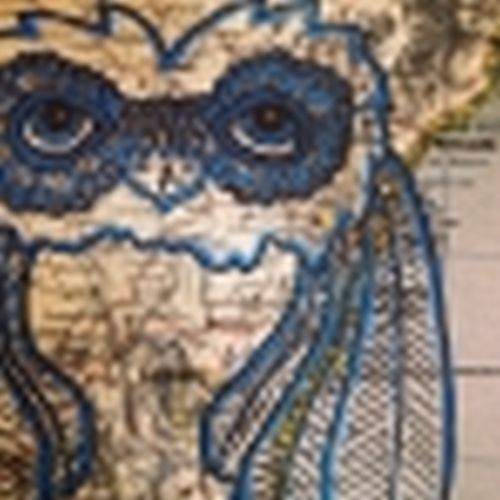 Hello, my name is Lu Quade,
and I'm a doodle addict. Newcastle

Luke Wade (a.k.a. Lu Quade) drew and painted a lot as a kid, but stopped at the beginning of high-school to concentrate on getting beaten up and learning to play the guitar. Many years passed… a few years ago his little girl Rose arrived. Largely as an attempt to kick a video gaming habit, and engage in a more productive/creative activity that he could share with Rose, he began to draw again. Not really very surprisingly his drawing had not continued to improve without him. “Yay!” he said, in his distinctive monotone, “I draw like a thirteen year old!!!” In a vain attempt to hide this fact he began to experiment with fine lines and obsessive detail to hide his clumsy lines. So far this has led to the creation of hundreds of owls: owls dressed as monsters, monsters dressed as owls, and so forth (some of which you might see as paste-ups, stickers and magnets secreted around Newcastle). He sees art as just another way to interact with people, and is also hoping this may all be honing the skills he needs to illustrate some children’s literature ideas he has been working on, and interact with the time-lapse and stop animation experiments he has just begun. At first he felt uncomfortable referring to himself in the third person, but found it a little too enjoyable towards the end… HI!!!

Lu Quade has not set any favorites.